Rear Admiral Giorgio LAZIO is a native of Treviso, Italy.

He attended the Naval College “F. Morosini” in Venice and the Naval Academy in Livorno, where he was commissioned and graduated top of his class with the rank of Ensign in 1983. After being embarked on board several Italian Navy Ships as Navigator and Communications Officer, in 1990 he assumed Command of the Offshore Patrol Vessel “SPICA”, also provided with specific antipollution devices, operating inter alia in the containment of the environmental emergency caused by the sinking of the oiler Haven in the Thyrrenian Sea.

In 1991 he was assigned his first ashore tour, initially at the Italian Naval Staff 2nd Department (Intelligence), then from 1994 to 1996 he was Commanding Officer of the “1994-1998” Cadets’ promotion in the Italian Naval Academy and, finally, he attended the 25th Higher Course at the Naval War College in Livorno.

From 1997 to 1998 he served at HQ NATO Striking Fleet Atlantic (COMSTRIKFLTLANT) - Norfolk (VA) – U.S.A., where he contributed to the stand-up of the NATO sea-based CJTF HQ and successfully completed a non-resident course in “National Security Decision Making” at the Naval War College in Newport (RI). Back in Italy, he qualified in the 1998-1999 1st Joint Staff Higher Course (I.S.S.M.I.) at the Defence High Studies Centre in Rome.

In 1999-2001 he assumed Command first of the ASW Frigate "SCIROCCO", operating in the Atlantic Ocean and Mediterranean Sea, then of the 1st Corvettes Division, also performing duties as Evaluation Officer of the Naval Command School .

In 2001 he started his second ashore tour in the Italian Naval Staff 3rd Department (General Planning), boosting inter alia the stand-up of the Italian-sponsored High Readiness Forces (Maritime) Headquarters. As Head of the Naval Policy Office, he promoted the Adriatic Ionian Initiative (ADRION), the maritime dimension of the 5+5 Initiative in Western Mediterranean and played a leading role in the development of the Virtual Regional Maritime Traffic Centre (V-RMTC) in the Mediterranean and Black Sea.

In 2006-2007 he assumed Command of the A/C “GIUSEPPE GARIBALDI”, operating in the beginning of his mandate in vicinity of the Lebanese coastline in support of UNSCR 1701 (Operation LEONTE).

He had just joined the Italian Defence General Staff 3rd Department (Plans & Policy) when he was selected as Principal Military Assistant to the Chairman of the NATO Military Committee – Brussels (Belgium), serving at pol-mil level from 2008 to 2011, a period when NATO underwent a revolution more than an evolution, welcoming two new members, launching a new Strategic Concept, initiating a deep reform of its structure and managing up to five simultaneous operations in three continents.

From January 2012 to March 2013 he served as Head of the Military Policy Office in the Cabinet of the Minister of Defence. Throughout his mandate he flew something like 250.000 miles in company with or under instruction by the Minister, globe-trotting through five continents.

In May 2013 Rear Admiral LAZIO assumed the role of Chief of Staff of the NATO Maritime Command (HQ MARCOM) located in Northwood, UK, when the headquarters was in the process of consolidation and transformation from two maritime component commands to a single Allied Maritime Command responsible for all four Standing NATO Maritime Groups and Operations Sea Shield and Active Endeavour. He led the staff from the initial stages of consolidation to the achievement of full operational capability. His leadership helped to steer MARCOM to where it is today, a trusted maritime entity, fully engaged in operational activities throughout the region.

From December 19th 2016 to October 21th 2021, when he retired, he held the position of the Northern Maritime Command, based in La Spezia, performing taks through 21 dependent Commands in the following sectors: logistical/territorial, administrative, legal, garrison, installation of defenses, mobilization/completion of forces, military police, civil protection, safety and environment protection, operational support and protection of classified information and state secrecy, with territorial competence on Northern Italy and Sardinia. The Maritime Commander is the element of the Navy that deals with governmental authorities, administrations and local entities allocated at the time in 11 regional jurisdictions.

After his retirement, he assumed the role of President of the Foundation “Tender to Nave Italia”, a common initiative between the Navy and the Italian Yachting Club of Genoa, supporting people with special needs or in social distress.

He has a Master’s Degree with honors in Marine and Naval Sciences and an Executive Master in International and strategic military Studies. Ha has received several awards and military decorations. Besides Italian, his mother tongue, he speaks fluently English and French. He likes to read and take promenades outdoors along the Ligurian and Thyrrenian sea coast, where he has established himself for many years. 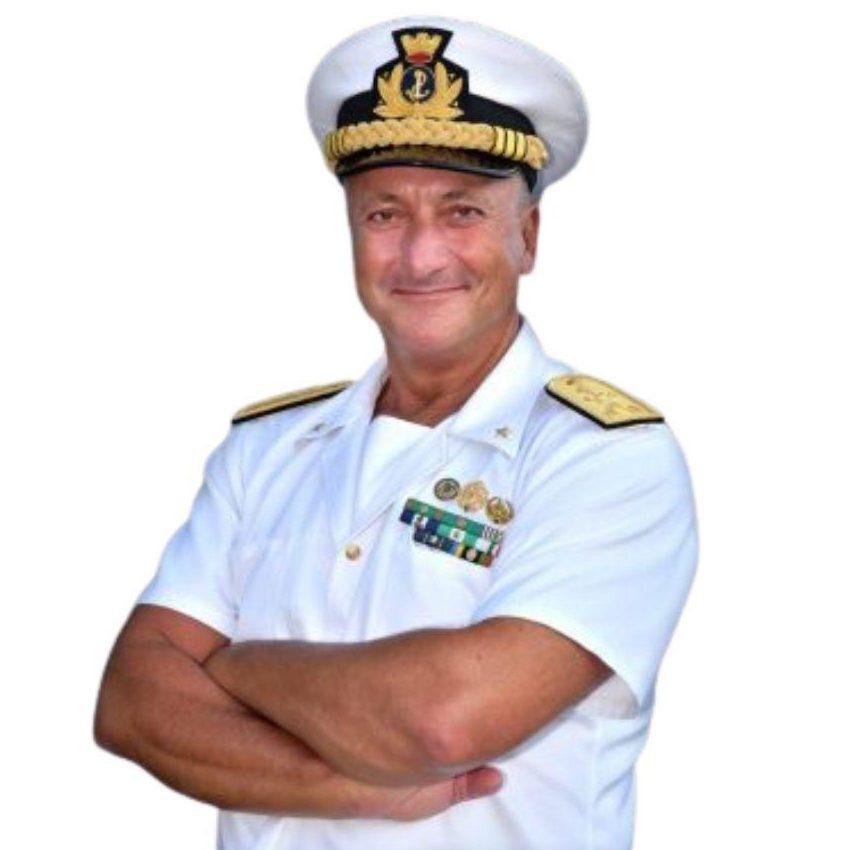